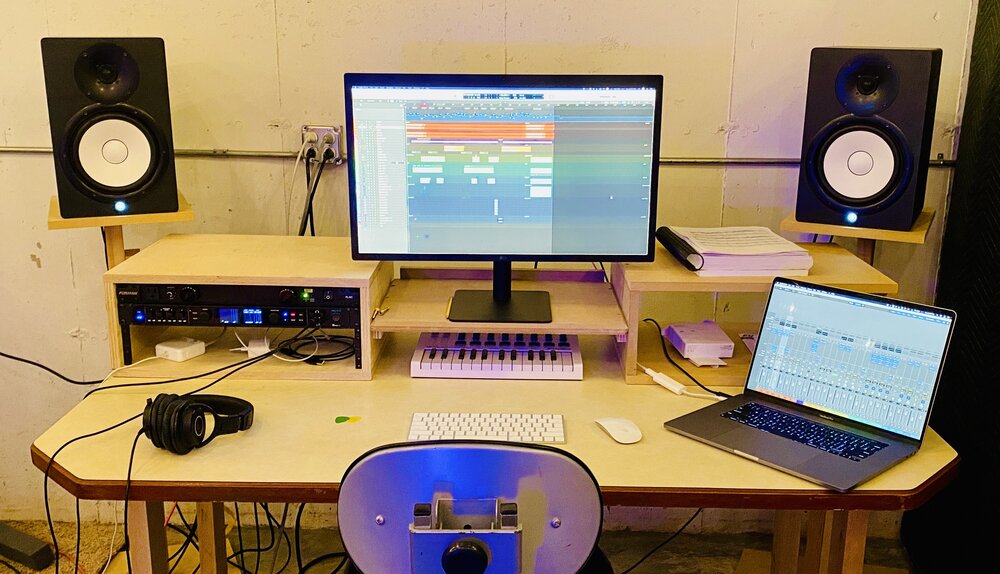 Histo has spent the first half of the year building a studio and recording the next album. It seems so inconsequential next to everything that is happening in the country and the world, but we still have the desire to create and want to share it with people.

It’s difficult internal struggle to spend money. And lots of music stuff is expensive, so we’ve done our best to put together our studio on a budget. Here is what we’re working with and some side stories about each piece where it makes sense. Thanks to Phil Young, Dana Telsrow, and Adam Hawkins for their gear suggestions along the way.

Made the desk legs out of leftover oak Don had from building a dining room table and the previous owner left some old table top. The monitor stand with rack mount is just lefter MDF/Plywood. It ain’t pretty but it’ll do.

There isn’t music to discuss yet but we can say the studio is getting lots of use. For now, check out the Recipes section for some things that we’ve been enjoying while the music is still cooking. If you haven’t listened to the latest instrumental track Nebulous Sevenths please check it out on our Bandcamp.

As I read this I hate hearing my words in my own head. Hope you chose to read this in your own voice and not mine.