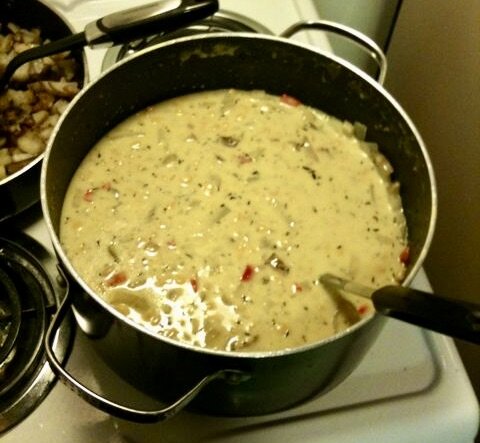 I am in the midst of making my first recipe: Chunky Corn Chowder Recipe

First off, I cut up four pounds of potatoes instead of the 2 that it tells me to. All that means is we have breakfast potatoes for tomorrow. Right now the potatoes are getting simmered until they’re almost cooked through. Although it says to cook on Low, I don’t think that’s right, cause the chicken stock was barely going.

I’m also not sure when i’m supposed to re-add the bacon in. I’m going to just do it when I add the corn. The fact that this recipe has bacon in it is just a coincidence. I saw “chunky” before I saw that it had bacon in it.

I think that Tara and I are going to just freeze this and then have it for lunches. I should probably be monitoring it more closely. I forgot to let the milk simmer for 15 min before adding the corn. But I ended up adding more corn than specified (it is corn chowder after all) so maybe that’ll make up for it. Although, the corn might get mushy.

Whatever. I’ll eat it.